Incorrect data was used to predict the merit lottery result

1. All racial minorities will lose in the new lottery system proposed by FCPS. Whites will be the biggest winners. TJ will go from being a mostly minority school to

becoming a mostly white school. The lottery plan gets an “F” grade for substance and implementation.

Twenty years ago, 70 percent of TJ students were white; today, 79 percent are minority, most from Asian immigrant families. The proposed lottery plan would decimate the representation of minorities at TJ, with the school soon becoming predominately white. Assuming that all of the students who qualify for the lottery will apply for admissions to TJ. the percentage of Asian students gaining

admission to TJ will be slashed by more than half from 73% admitted in the Class of 2024 to 33.52%. In contrast, the percentage of white students gaining

admission to TJ will more than double from 18% admitted in the Class of 2024 to 44.88%, making white families the plan’s greatest beneficiaries and dramatically shrinking the school’s overall percentage of minorities. Here is the underlying data analysis by Coalition for TJ.

2. In a best-case scenario with successful outreach, the proposed lottery plan will only minimally increase representation of Black and Hispanic students.

about 43 students from 16 Hispanic students admitted in the Class of 2024. This increase likely will be temporary as Asian families start to move to increase the odds of students in their families gaining admission to TJ under the lottery system.

3. The lottery plan amounts to a targeted attack on three middle schools -- Rachel Carson Middle School in Herndon, Va., Longfellow Middle School in Falls Church, Va., and Kilmer Middle School in Vienna -- with a large number of Asian students who have traditionally gained admission to TJ.

As a result, FCPS is grossly overestimating the percentage of Asians who will be able to get selected for admission to TJ. The number of students who gain admission to TJ from Rachel Carson Middle School will decrease by 70% and the number of students who gain admission to TJ from Longfellow Middle School will decrease by 66%. Admissions from Kilmer Middle School in Vienna, Va., will decrease by an estimated 22%. This bias against Asian students from these schools is reflected in 2018 testimony in the Virginia General Assembly by a retired Rachel Carson Middle School school teacher, who called the parents of these students “ravenous,” saying they immigrate to the United States “however they get here” from India. (In a secondary impact, the lottery will also impact home values in the communities with these three schools, because they will no longer be considered strong feeder schools to TJ.) 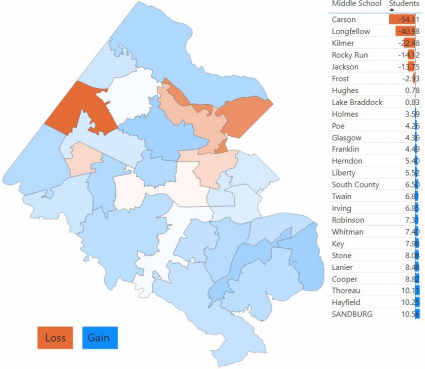 4. FCPS has said that it will include essays in its proposed lottery plan as part of its evaluation of student merit, but it is not realistic to expect that FCPS will evaluate essays from the flood of students who will qualify to apply for admissions to TJ under the new lottery plan. The pool to be evaluated will increase by five times to an estimated 4,405 students who will qualify for the lottery, compared to the 822 FCPS students who submitted essays as semifinalists for the Class of 2022 admissions process. (That number was reduced from 2,052 FCPS students who applied with a GPA of over 3.0 and 1,825 students with a GPA of over 3.5 GPA.)

5. Waiving the application fee for all applicants will also benefit people who can afford the fee, with FCPS losing at least $300,000 in revenues, the salary of 6 entry-level teachers, paid at a base salary of $50,000. That money could be used to increase the number of students from underrepresented minorities, for example, through additional outreach.

1. FCPS Middle School Data identifies racial demographics by middle schools. We used half of the middle school count to extrapolate estimates for eighth graders who would qualify to apply for a lottery for admissions to TJ, including expectation

of a GPA of 3.5 or higher and performance on the math Standard of Learning exam.

2. Using research from the Journal of Blacks in Higher Education, we assumed two of every five white students graduates and less than one in five Black graduates achieved a GPA greater than 3.5.

4. We adjusted the number of eligible students for the lottery based on middle school rankings by Great Schools Ratings. We assumed a 10% positive/negative adjustment for each school’s count for every point difference from the weighted mean rating of all FCPS middle schools.

Please contact the Coalition for TJ at CoalitionForTJ@gmail.com to discuss these findings.